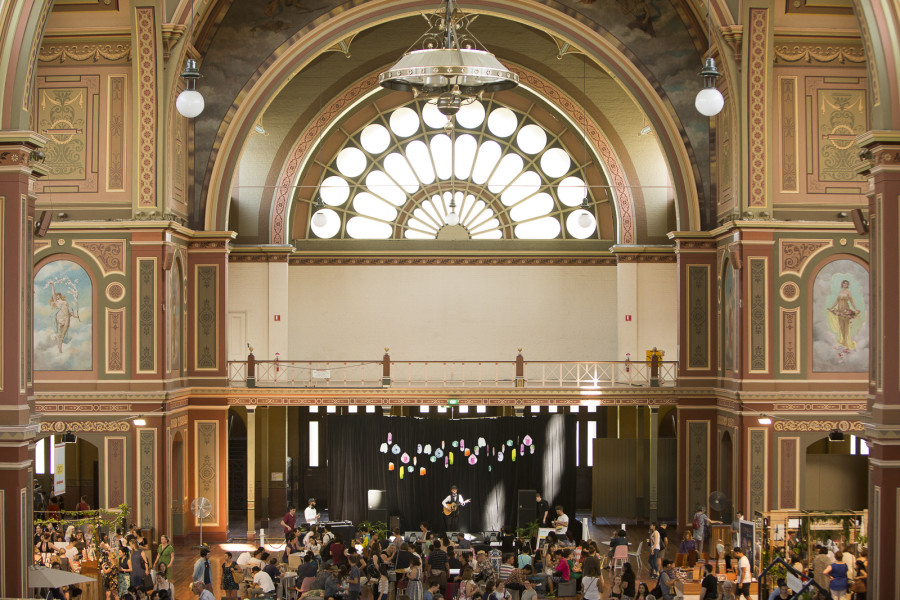 Image captured by Mark Lobo at our Melbourne SS15 Market

Our live music line-up is now here for the Melbourne AW16 Market taking place at The Royal Exhibition Building on Friday 22nd, Saturday 23rd and Sunday 24th July!  We have an impressive set of talented musicians to entertain you while you shop, eat and relax at our three day event.

Find the music set times below and discover more about on our skilful musicians.  You can also get into the groove by checking out this Spotify playlist featuring some sweet tunes by our performers! 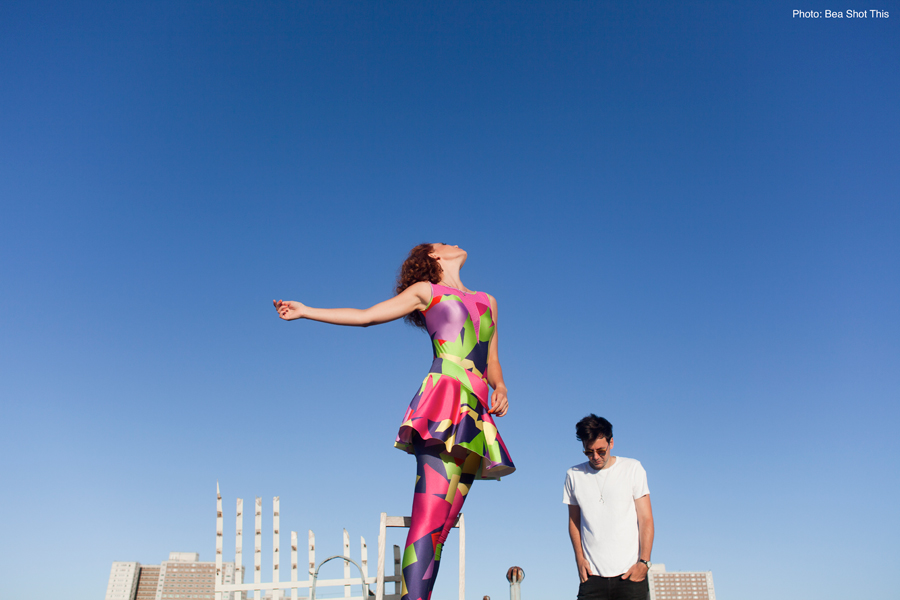 The Twoks
The Twoks are Xani Kolac (electric violin/vocals) and Mark Leahy (drums). The Melbourne-based duo have been making violin and drums dance music together for the past four years. With influences ranging from Sigur Ros, Kate Bush, Phoenix, Leonard Cohen to Pat Benatar, this duo is an eclectic mix of dark and bright.
The Twoks have played St Kilda Festival (Melb), DARK MOFO (TAS), The Falls Festival (Byron Bay), Edinburgh Fringe Festival (UK), Woodford Folk Festival (QLD), Port Fairy Folk Festival and a stack of other gigs, clubs, parties and cities. Recently, The Twoks opened for Clare Bowditch and Adalita’s “Winter Secrets Tour” as well as for 2Cellos at The Palais. The pair have released a bunch of recordings, including an LP of half an hour’s worth of instrumental improvisations. The duo have worked with producers, Tony Buchen (The Preatures, Andy Bull) and Andy Baldwin (The Cat Empire, Haerts) and Xani Kolac was nominated for the AUReview award for Best Live Instrumentalist in 2014. 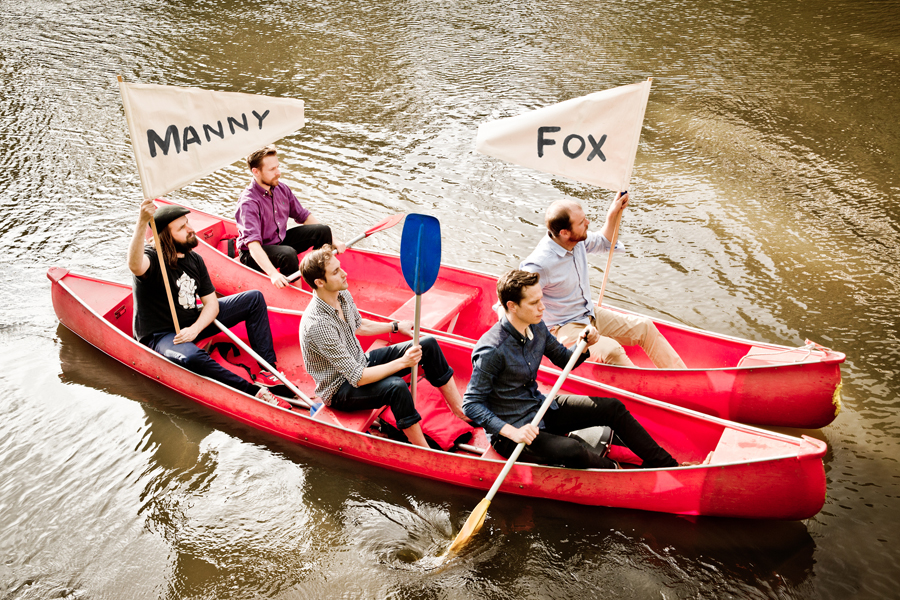 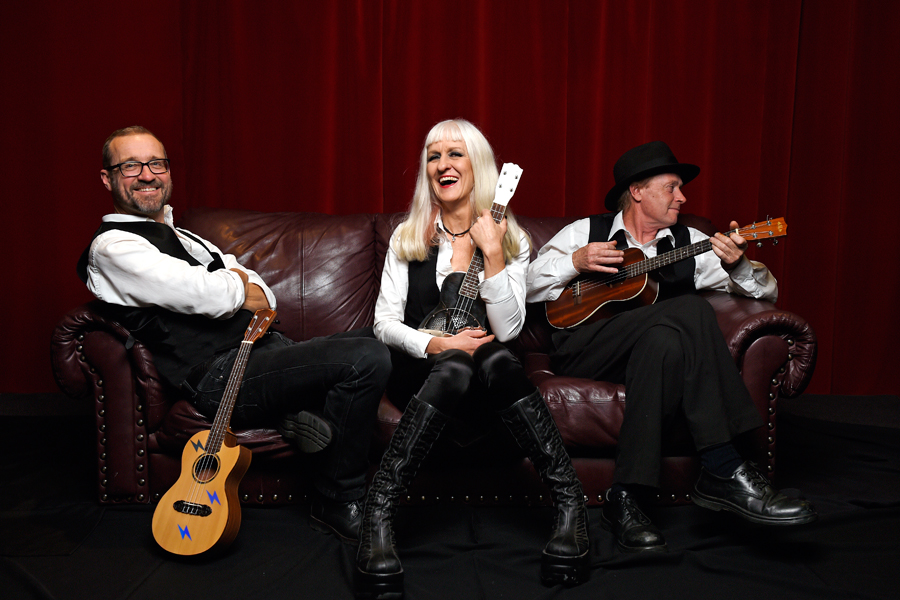 The Thin White Ukes
The Thin White Ukes perform the songs of David Bowie (and friends) with ravishing three-part harmony and precision ukulele fireworks. From Major Tom to Lady Stardust; Golden Years to Let’s Dance, rock’s most radically ch-ch-changeable songbook is ripped up and restrung in a death-defying act of reinvention worthy of the great late Duke himself. Betty France, Michael Dwyer and Robert Stephens became the Thin White Ukes in 2014, to explore a mutual passion for crafty musical arrangements and the timeless genius of the Bowie catalogue. A hit of the 2015 David Bowie Symposium at the Australian Centre of the Moving Image, they became a recurring fixture at the David Bowie Is… exhibition from the V&A Museum in London.
They have opened for rock legends the Models, Robert Forster and Mental As Anything, and US alt-rock hero Mark Lanegan. Their list of on-stage collaborators includes Jen Cloher, Angie Hart, Ashley Naylor and free jazz freaks, Bohjass. Their self-titled 4-track EP, produced by Andrew Duffield of the Models, is available on iTunes and Bandcamp. 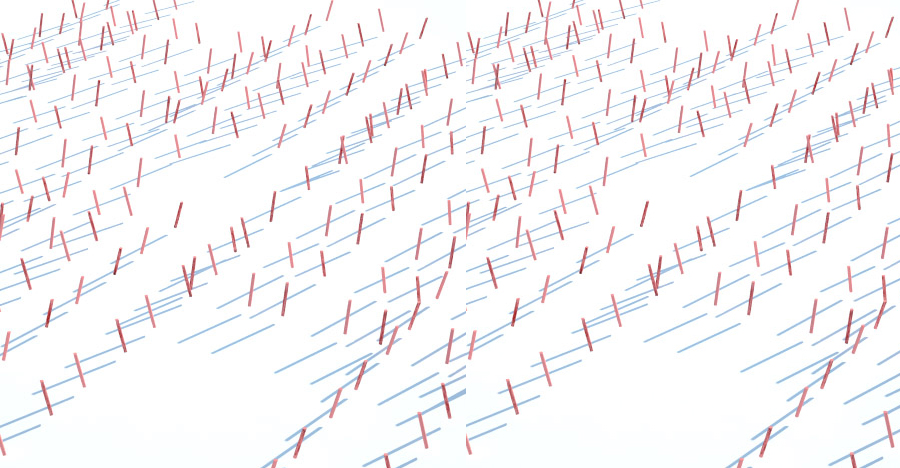 May Day
Architect by day DJ/Music Producer when the sun comes down, May Day has been involved in several projects lately one of them being Early Music mixing electronic music and classical choral music. May Day will use his subtle mixing skills to spread his eclectic music tastes throughout the Finders Keepers Market and set up a nice, chilled vibe in the Royal Exhibition Building. May Day will also be playing between sets. 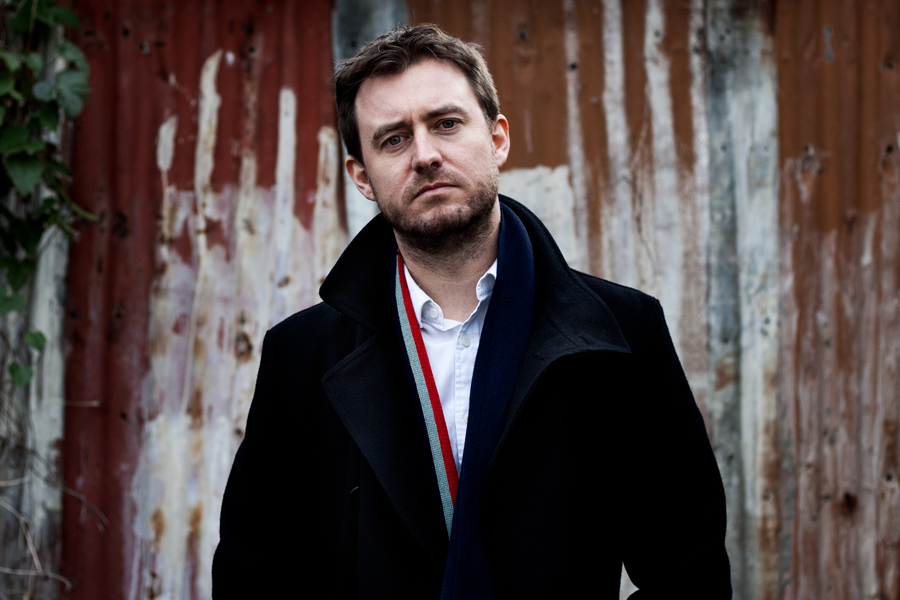 Floyd Thursby
Floyd’s been song-hunting in the mountains of Kyrgyzstan. He’s spun Bulgarian transvestite gypsy dance pop in clubs. He slumbered by the Flaming Crater of Darvaza. He sang chansons françaises for the French consulate in Saigon. He gave a private show to the Squatter King of Hanoi. He founded avant-garde instrumentalists the Ang Fang Quartet. He fronts acclaimed jazz manouche and French chanson ensemble La Mauvaise Réputation. He’s composed scores for award-winning films. He’s been to an orgy. He’s been to the High Court.
Songwriter, singer, nightclub entertainer, instrumentalist, DJ, film-score composer, gentleman adventurer, hedonist, lawyer & social justice campaigner, Floyd is one of Australia’s most versatile musicians. Schooled in ancient texts & early jazz, centuries of street & prison slang, French decadence & cinematic spectacle, his songs tell of love and death, brimstone and ecstasy, the sacred and the profane. 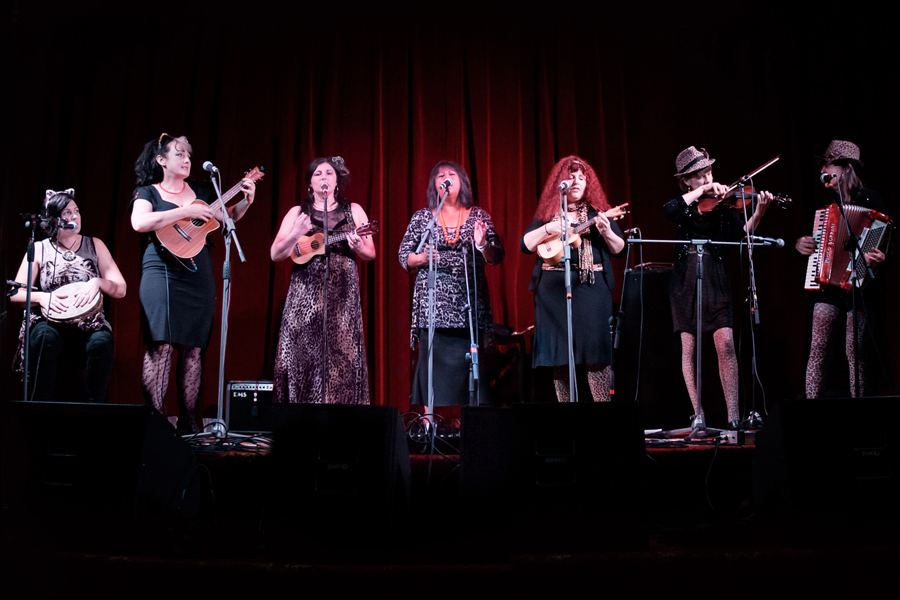 Cat House
With a repertoire of sassy songs, sweet harmonies and an remarkable range of small instruments, these Melbourne-based felines aim to sound purr-fect. 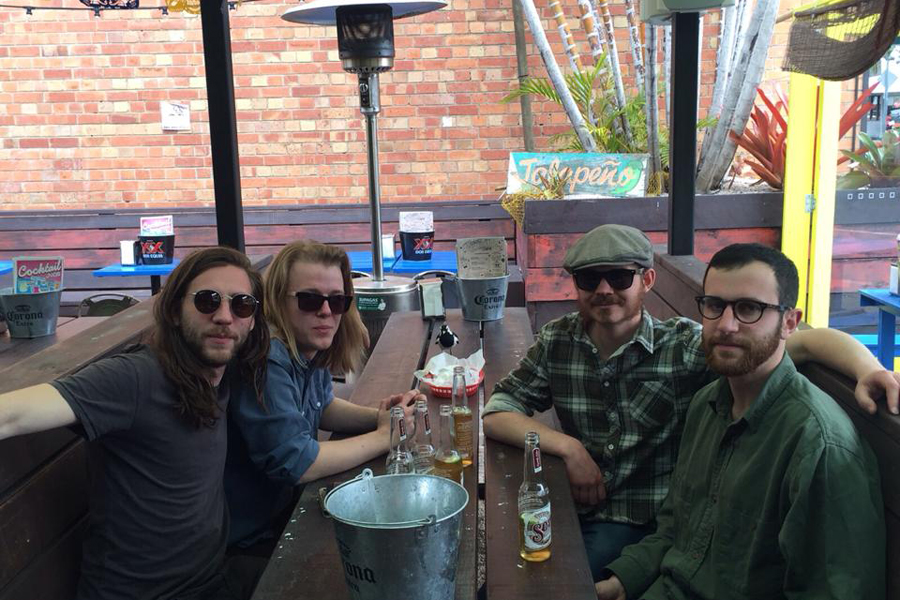 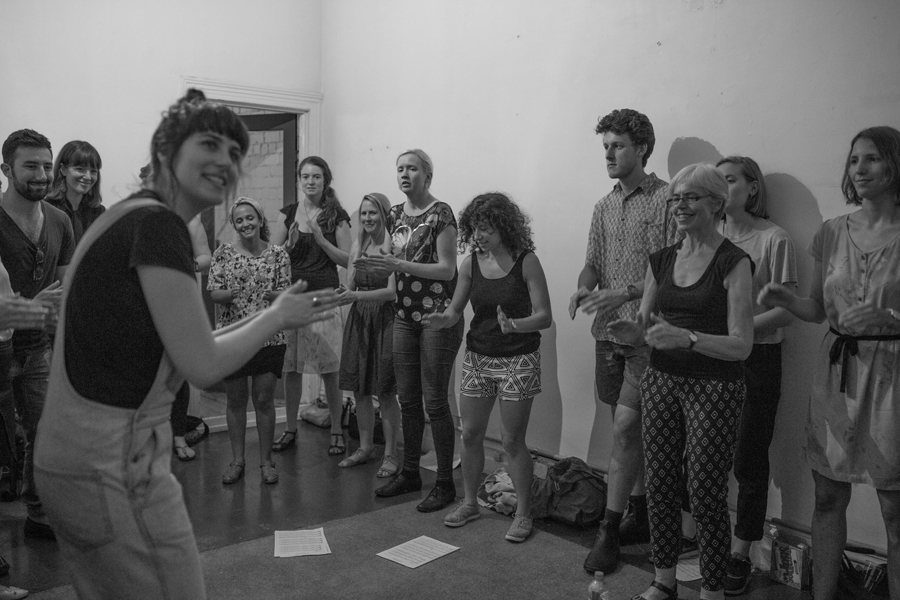 Melbourne Indie Voice
Melbourne Indie Voices was established in February 2016 and is run out of Fitzroy by singer-songwriter/multi-instrumentalist Sophia Exiner (Phia). MIV is an indie-folk choir singing indie/pop/folk/alternative songs arranged by Sophia, some cappella and some accompanied by producer and songwriter Josh Teicher on guitar and bass.
Sophia started the choir when she moved back to her home town of Melbourne after living in Berlin for 5 years, where she made a living from touring with her DIY-pop project Phia as well as setting up her first choir, the Dienstag Choir in Neukölln.

With singers coming from all over Melbourne, the choir has grown in less than 4 months to 45 singers run over two nights. With a passion for left-of-centre songs, and songwriters outside of mainstream exposure, Sophia set up Melbourne Indie Voices to shine a light on the incredible songwriters writing today in Australia and globally, and to bridge the gap between performer and punter. 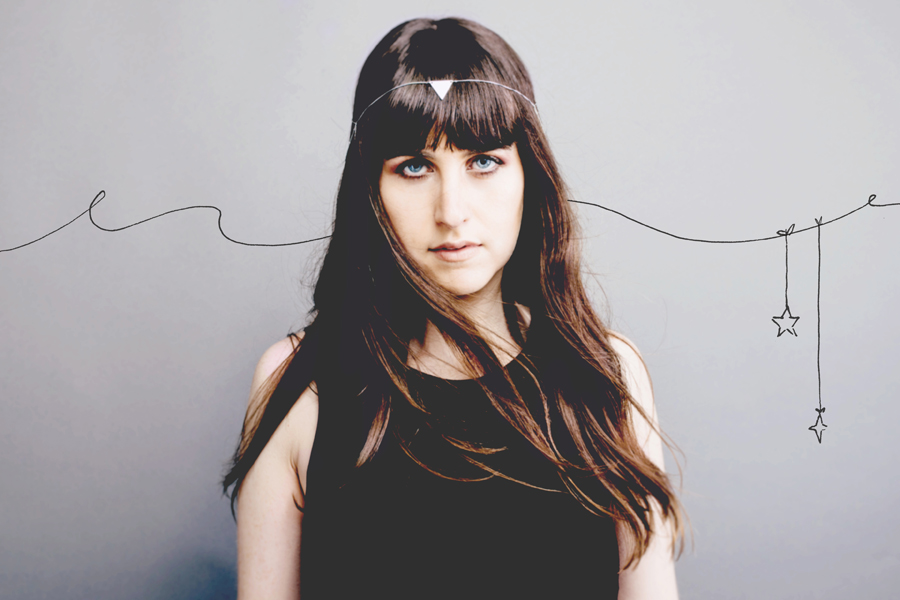 Phia
Phia’s music is abound with luscious layers of harmonies, rambunctious vocal percussion and vivid pop sensibilities. Raw and affecting lyricism is powerfully woven into the hypnotic sound made by an instrument of wood and metal and not much bigger than a postcard – the African kalimba, which has become Phia’s instrument of choice and self-expression.
Phia grew up in Melbourne Australia where she studied improvisation at the Victorian College of the Arts. In 2011 she bought a one-way ticket to Berlin. The kalimba and a loop-pedal in the bag, she dared a leap into the unknown that marked the starting point of a musical journey across the world. She played 100’s of shows performing her songs which spin a patchwork of images, feelings, memories and reflections. Remote places like bars in Southern Italy or a fisherman’s village in Iceland as well as international festivals in Germany, Poland and elsewhere have since appreciated her talent and brought her a growing audience that has evolved into a loyal fanbase.
Now back in her home town of Melbourne, she will be releasing her debut LP ‘The Ocean of Everything’ in September. 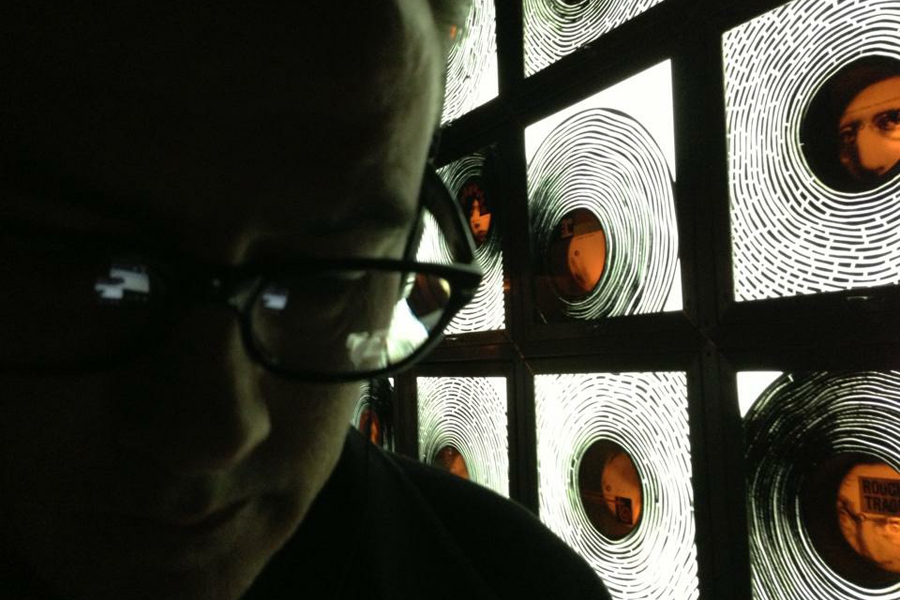 Pat is an occasional interloper on Triple R, frequently heard muttering “Fashion fades, stylus is eternal” and holds un-dimming hope for a collaboration between Lee Perry and Tom Waits. 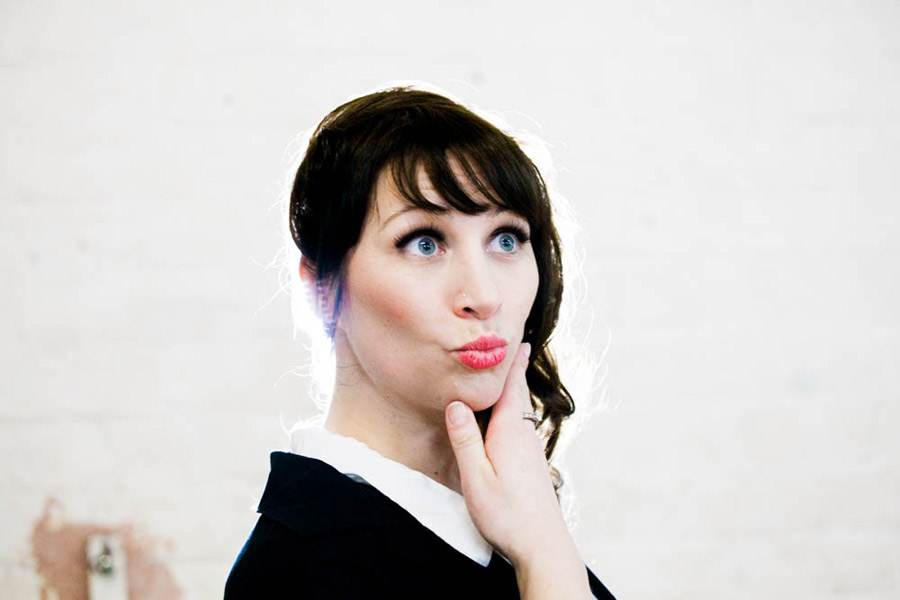 The Bek Chapman Kid’s Show!
Bek Chapman is a seasoned entertainer and educator. She has toured Australia with Tony Bones Entertainment, performed at numerous birthday parties with Bop Till You Drop and has worked at Mini Maestros for five years. She once played Maria in the Sound of Music for Beaumaris Theatre and felt so natural in the role she decided to keep it up!
She has performed two children’s shows for the Finders Keepers Market and combines interactive storytelling, sound effects, songs and daggy dances for all the children to join in – whilst the parents get plenty of embarrassing footage to show at their 21st birthday. 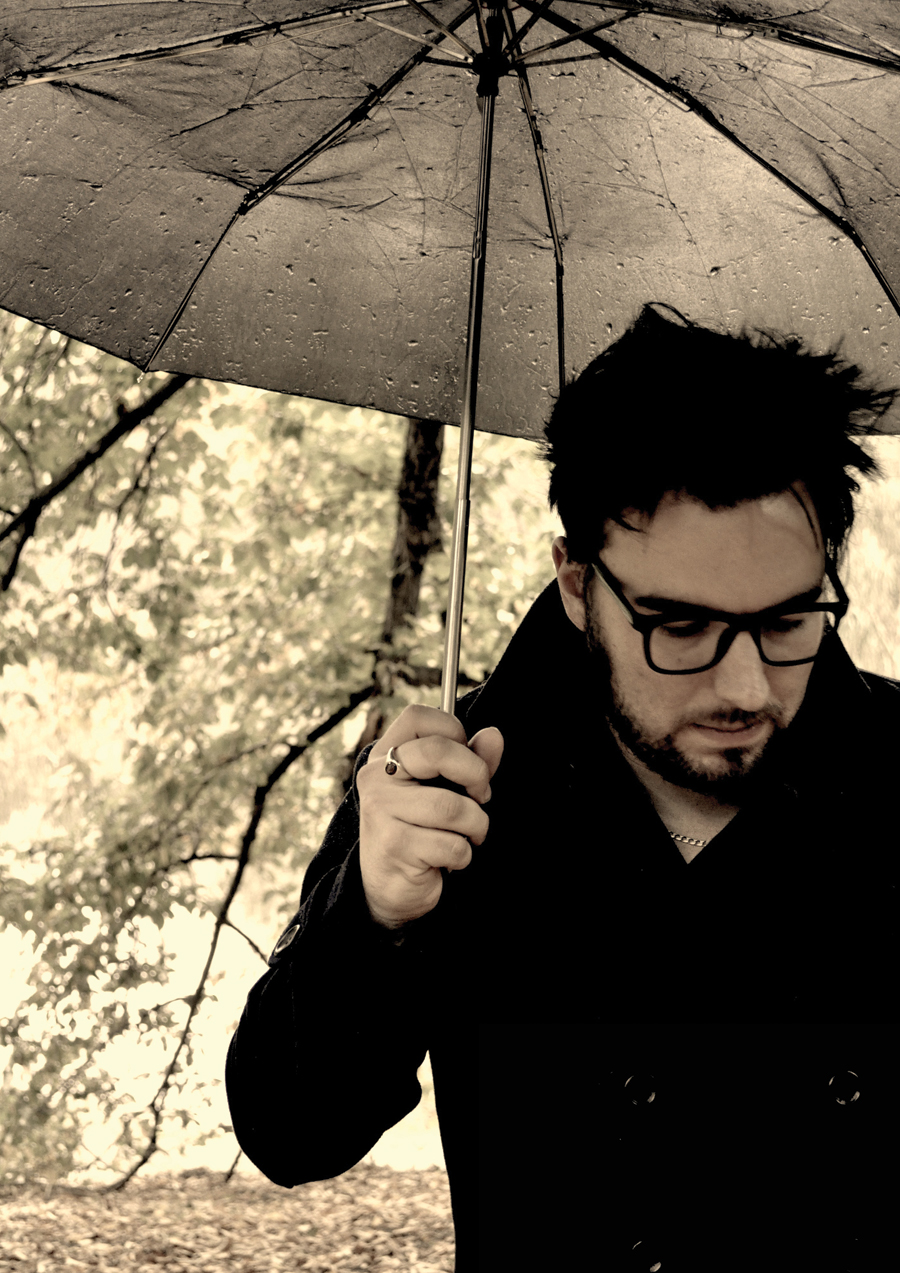 Rich Davies & The Low Road
Renowned for his captivating live shows and ‘superbly crafted songs dragged up from the depths of the soul and spewed forth upon the audience’ (Desert Highways), award-winning singer-songwriter Rich Davies has established himself as one of Melbourne’s most authentic and engaging artists. Described as ‘hauntingly beautiful’ by Patrick Emery (Beat Magazine), Davies has performed alongside Australian artists Jeff Lang, Mick Thomas, Wagons, The Drones, Paul Dempsey and Marlon Williams; international acts Snow Patrol, KT Tunstall, The Dandy Warhols and Beck; and has played a number of European festivals including Big Tent Festival and T In The Park.
Son of a folk singer, Davies spent his formative years in folk clubs, steeped in the culture, ethos and traditions of the genre. The evolution of his new sound has seen him reconnect with that world. The music echoed this journey as he peeled back the skin of rock’n’roll to expose folk, country and blues bones; his Scottish roots weaving their way through his acoustic story-songs with unmistakable passion. 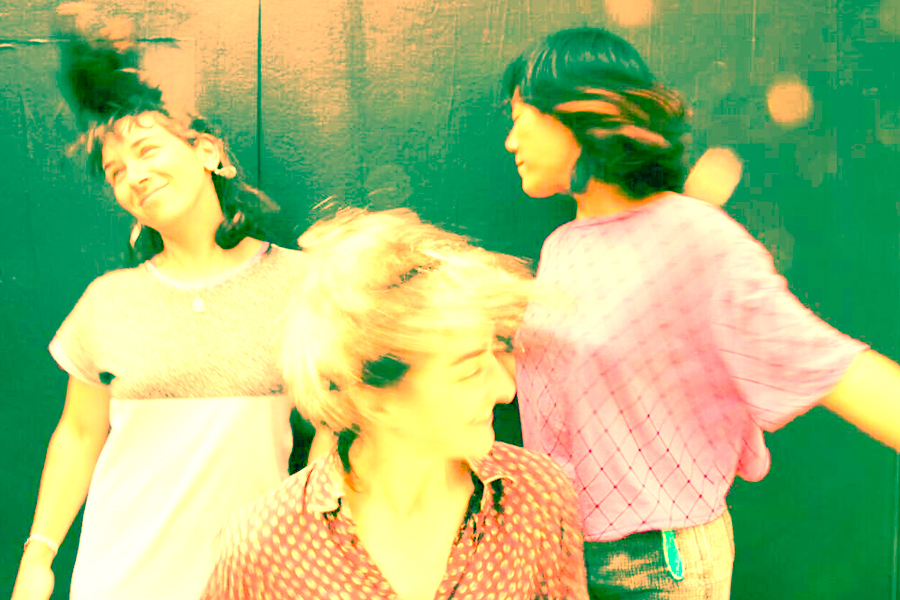 Empat Lima
Hypnotised by the garage sounds of the 60’s Asian/Western explosion, EMPAT LIMA draw on sounds of psychedelic Thai, traditional Japanese epics and dreamy Indonesian pop to make one balmy night of dancing A- go-go.
Their super twangy guitars, exotic serene voices and driving rhythm section will have you drifting on a journey across oceans. With songs that evoke the hot perfumed air of Jakarta before rain and the noisy pink neon of Osaka with a bit of fish grit, these girls bring a fresh upbeat garage pop style to the scene. 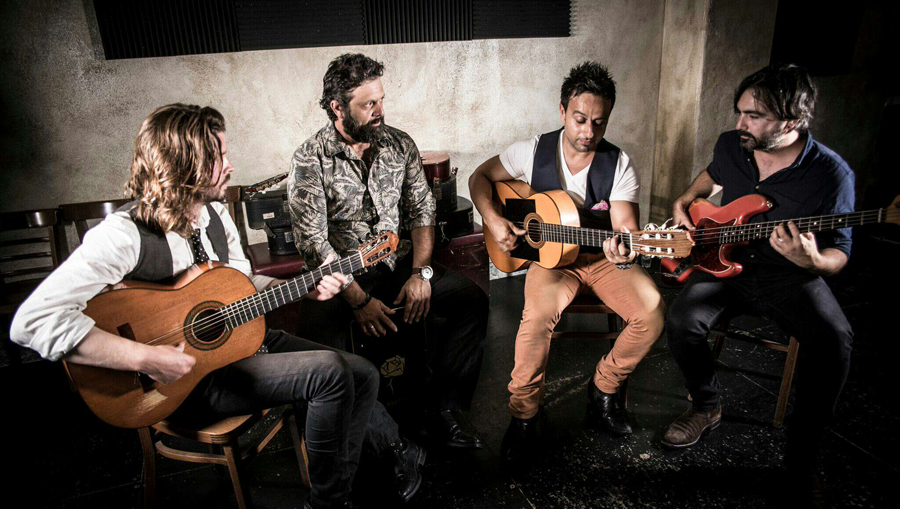 La Rumba
Founded upon a shared love for both old and new wave Spanish flamenco, La Rumba present their unique and passionate take on the spontaneous rhythm that is rumba flamenca. Having performed steadily on the Melbourne scene for the past 5 years, La Rumba have established themselves as true crowd favourites: from their infectious grooves right through to their stirring guitar-instrumentals, this is one act not to be missed!