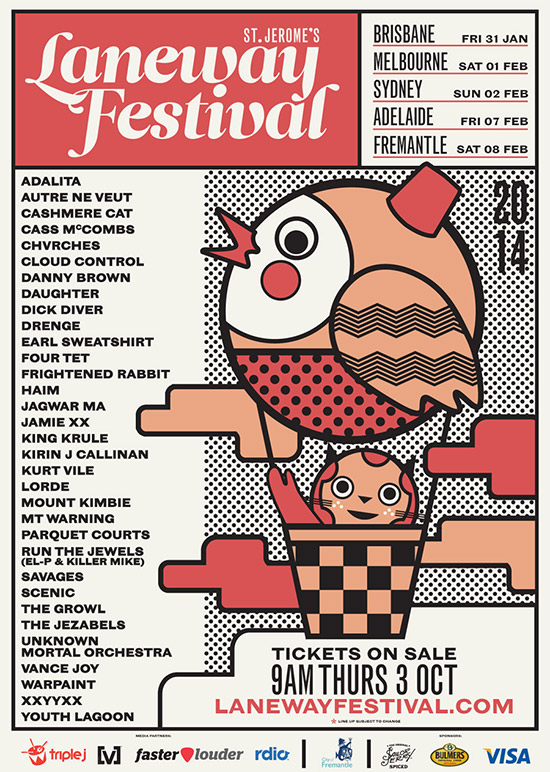 We’re pretty excited to let you know that we’ve partnered with the amazing Laneway Festival to help curate their markets in 2014 in both Sydney & Melbourne! We’ll be at Melbourne’s Laneway Festival on 1st February & at Sydney’s on 2nd February 2014. We plan to showcase a select amount of stalls, with some unique & fun features!

If you have been living under a rock and haven’t heard about St Jerome’s Laneway Festival – it all started in 2004 as a ‘laneway party’ in Melbourne with great local music in a unique setting. Since that first, fateful day in a back alley, the festival has quickly developed into a national touring event and a favourite summer festival for many great, music-loving humans.

Tickets actually go on sale TODAY! Get in quick so you don’t miss out. Check out their Facebook page for live updates as well.

If you’re interested in getting involved in one of the Finders Keepers Markets at the Sydney or Melbourne Laneway Festival in 2014 – please send your expressions of interest to us: markets@thefinderskeepers.com

We look forward to sharing more news about what we’ll be doing at the Sydney & Melbourne Laneway Festivals over the coming months – watch this space!
P.S how great is their 2014 Festival artwork?! Meet Rossco the bird and his side kick Derrick the cat. Artwork by Webuyyourkids.