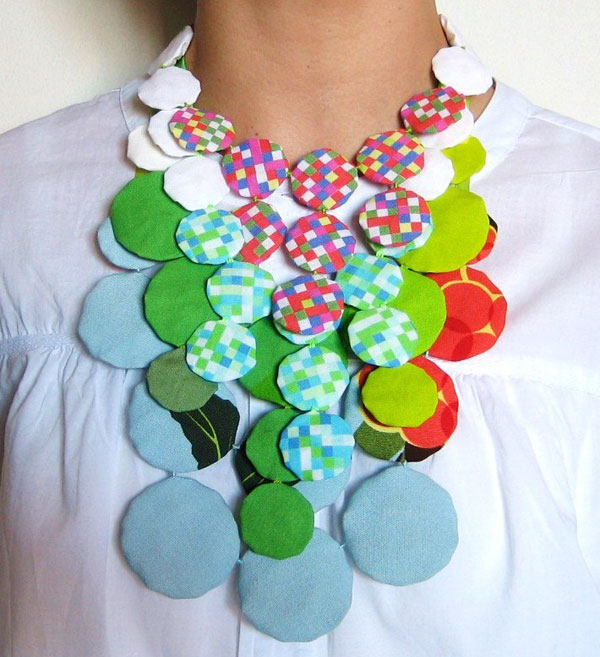 Introduce us to The Empress Dowager’s New Jewels and what can we expect to find?
The Empress Dowager’s New Jewels are my cheeky take on those old-school over-the-top drippy-drapey heirloom jewellery. They are made with “gems” fashioned from scraps of jewel-hued Marimekko textile that I’ve collected over the years, new fabric that I can’t help buying and also those that I’ve “reclaimed” from things like vintage cushion covers and clothes that I don’t use anymore. The “gems” are then put together in “settings” that resemble those of the old expensive numbers but in more exaggerated and abstract forms. I think of them as caricatures of the real deal.
You can expect to find overstated and drama-mama 100% hand-stitched (with love!) neckpieces that are all one-offs. They make a super-amplified statement but do not weigh a tonne and will not turn your neck all green and rashy if you are one who is allergic to certain metals. Unlike the heirloom pieces, you can safely wear and show them off without having to pay a hefty sum in insurance.

What is the story behind the name and what inspired you to start?
The name is a very obvious spin on Hans Christian Andersen’s “The Emperor’s New Clothes”. The Empress Dowager’s New Jewels is similarly about how we look at things and why we choose to see them the way we see them – like how I look at the shower cap-like pieces that I’ve modeled out of cloth and see “precious stones”. Not “Empress”, “Queen” or “Princess” but “Empress Dowager” because it’s a Chinese thing and it’s the family’s nickname for the grandma (quite a tyrannical matriarch like the notorious Empress Dowager Cixi) who taught me how to make these “gems” when I was a little girl.
We used to make things like blankets, rugs and placemats from these “gems” then but it was not until late-2008 that I decided to re-explore the method again, to make wearable objects out of them.
I’ve had all these ideas for The Empress Dowager’s New Jewels floating around in my head for ages but I’ve never had the time to see them to fruition because of my time-and-energy-sapping day-job. After I quit that job and while looking for a new one, I had all the time in the world to translate those ideas into tangible pieces and to my surprise, they worked! And I’ve not stopped since. 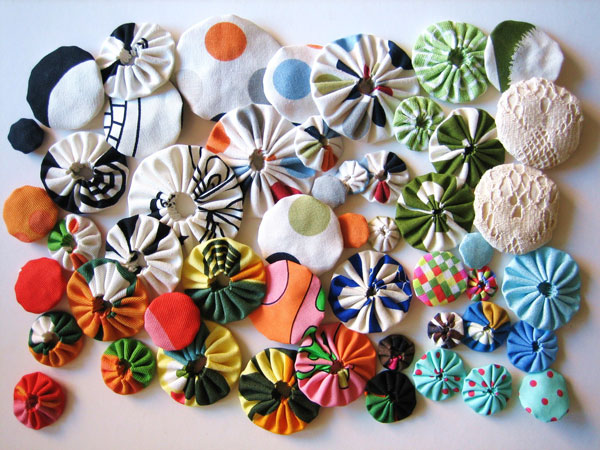 What is your creative process and what inspires your work?
The Empress Dowager’s New Jewels, in the beginning, were inspired by designers/artists who make things that perform their intended functions but not from the traditional materials that we have come to expect. Like wearable dresses made out of paper instead of cloth, plates that look like china but are shaped from paper, or a blow-up Chesterfield sofa made from PVC instead of leather. Things with an added twist that will make me to do a double-take after the first glance of appreciation. Things that are out-of-the ordinary yet subtly so. Preferably with a dose of wit and humour throw in.
Now, a year later, I am still very much inspired by these designers/artists and their work (they keep churning out such good stuff and then there are always new people to discover!) but over the course of the year, I find that I also get a lot of ideas from things that I see all around me – on the streets, on the internet, magazines, books, television, films…everywhere!
The fabric “gems” are like my LEGO bricks. There are only a few sizes of “gems” that I like to use. If I make them too big, they will not hold their shapes and if I go any smaller than the smallest, it’ll be hard to “puff”. And I insist on hand-stitching everything, from each individual “gem” (there is no machine that I know of that can do the job…yet) to joining them together.

While some might find it restrictive, I thoroughly enjoy having to work within such perimeters. It forces me to creatively use what little that I have available to me to come up with a good product. Like making a Dogme 95 film, perhaps? 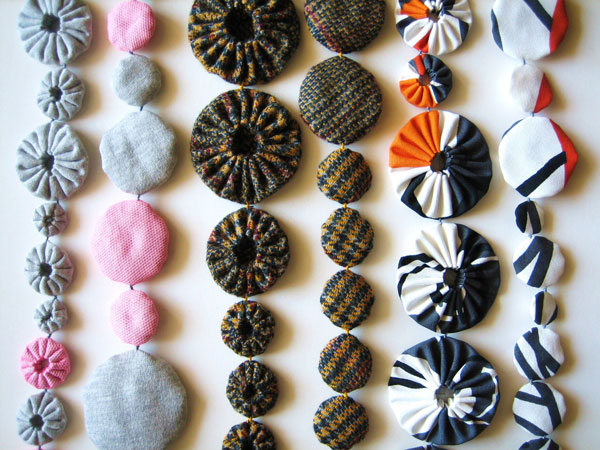 How has the journey been so far since you have launched your label?
Like all ventures, self-funded or not, there are ups and downs.
The decision to pursue it full-time, without a day-job for financial back-up, was a big one. It took a lot of getting used to, from getting a steady monthly income to not knowing if I’m going to sell enough every month to make rent. But it was one of those “either-or” situations – making the New Jewels is a very time-consuming process which I don’t think I’ll be able to do if I had continued working at my long-hours back-breaking day-job. Now, I work just as many hours each day on the New JeweIs but I’ve enjoyed and still am enjoying every minute that I’ve spent on them. I still am not sure if I’ve made the right decision but I’m a happier and much healthier person albeit a poorer one.
However, all the doubts get banished to the back of my head when I think of all the lovely people that I’ve met because of The Empress Dowager’s New Jewels. It’s a completely different feeling when I hear strangers tell me how much they love my work compared to hearing the same words from friends, strangers who love them enough to be “swindled” into buying them and some coming back for more. Then there are the other designers/makers who have lavished my work with generous praises when they make things that are more beautiful themselves. It’s all very exhilarating and humbling at the same time.

What was your experience like at the Finders Keepers and what did you learn the most?
At risk of sounding cheesy, it was like a dream-come-true! I’ve been a fan of the Finders Keepers since their early days when they were known as The Hope Street Markets, operating out of a small hired restaurant space in Surry Hills. I said to myself then, “When I finally get my act together to make things to sell, I want to show at this market one day.” You can’t imagine my glee when I received news that my application for a stall at the Spring/Summer 2009 markets has been accepted! To have my work shown next to designers/makers that I’ve admired for a long long time. *Fangirl-like squeals*
And it was so well-organised for an event of that scale! From all the updates that the wonderful and extremely helpful organisers sent out regularly to keep us in the loop to the ease of setting up on the markets days. They made everything such a breeze and I’ll do it all over again if they’ll have me back.
I’ve learnt that, apart from selling, it’s important to have fun too. Get to know your neighbours (we had such a hoot with ours! Hello, Finchbird!), chat to the more established and experienced designers/makers and learn from them, have a good nosey-around and be inspired by their work. Oh, and shop early, before the doors open to the public. 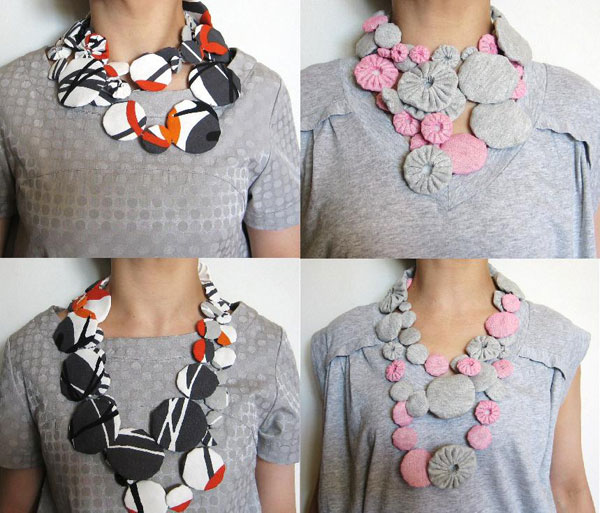 What are you currently working on for 2010?
I’ve started working on pieces for Autumn/Winter 2010.
First up, re-visiting a “setting” – the “Milky Way” – that I developed early last year but have used only once since. It’s a long scarf-like strand of “gems” in various sizes (see pics above)…that you can wear in a multitude of ways.

This Winter, The Empress Dowager’s New Jewels “go to the gym” with a lot of athletic grey coupled with bright bursts of neon mesh.
There will also be pieces in traditional Winter-y fabric such as tweed, suede and tartan in a variety of colourways. And of course more will be added to the bright printed heavyweight cotton range.
A “bejewelled” capelet and hand muff are in the works – more fun things to add to your Winter wardrobe, if I succeed with the prototypes!
Then there are the three special pieces that I have to make for an exhibition (my second!) at the new Gaffa gallery – been wanting to incorporate embroidery and embellishments into the New Jewels so these pieces might be a good start to trying that idea out.
And I really really need to get The Empress Dowager’s New Jewels out there! I’ve spent so much time the last year perfecting them but have neglected the marketing side of things besides taking them to three design markets. Like finding retailers – local, overseas, online, in the “real” world – who might want to stock them. (Retailers, if you like what I do and are reading this, I’d love it if you got in touch!)

I love love love textile and would like to find some textile designers, if they are keen, to have a bit of fun doing a collaboration range together? It would be such an experience to have an opportunity to work with and learn from other like-minded people. Any takers? likklegirl@gmail.com
So many ideas, so much to do but there are only so many hours in one day!