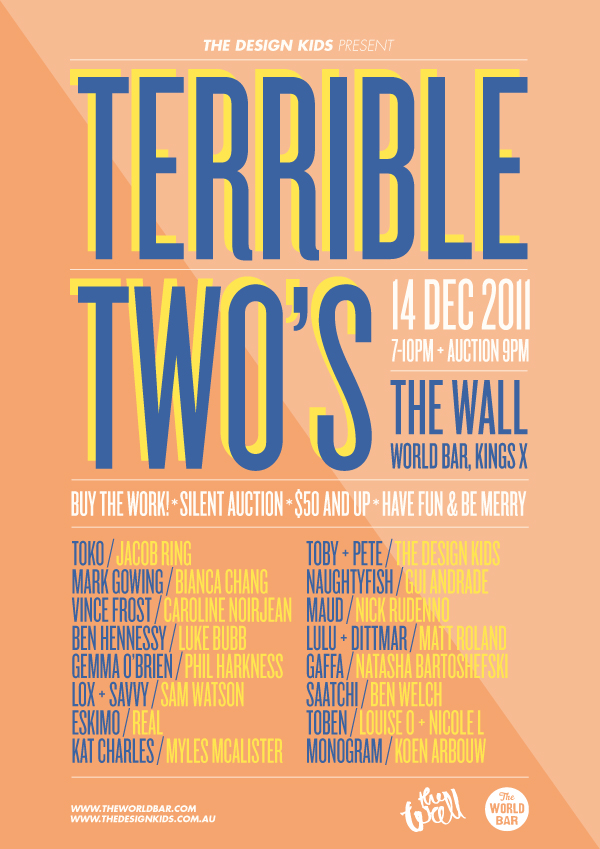 FK chats to Frankie Ratford, from The Design Kids about their upcoming event, Terrible Two’s.

You’re curating you’re own show next week! So what can we expect to discover?
The Design Kids is about bringing emerging designers and established studios together in the design industry, and what better way to do that then making them collaborate on the same project! As TDK is turning two this month, we decided to build the theme of the exhibition around this. The concept revolves around compounds words, two words that when put together mean something else, such as ‘after’ and ‘math’. We’ve given each designer a diagonally cut piece of A1 to work with and half a compound word to respond to. You’ll be able to buy the work at the show too!

Can you tell us about the 20 paired designers involved in the festival?
We’ve been super lucky to get such a superb line up! The show includes some very talented Sydney based studios and creatives. We’ve got Toko / Jacob Ring, a well known Sydney based Dutch born killer design duo, and an awesome local photographer; Mark Gowing / Bianca Chang, Mark’s work is well know for his Hopscotch identities, some amazing poster designs and lots of AGDA awards, and Bianca the paper engineering genius who has had a lot of press this year; Vince Frost / Caroline Noirjean, a graphic design legend with a strong emphasis on typography and letterpress, and a local design graduate from France; Ben Hennessy / Luke Bubb, Ben’s typographic work is crazy awesome, and currently is a designer at Frost, and Luke brings a more geometric futuristic response to the other side, and is currently working at Fuel; Gemma O’Brien / Phil Harkness, Gemma is well known for her blog, For the Love of Type and has an obsession with all things typographic, and Phil’s black and white illustration style should complement this perfectly; Lox + Savvy / Sam Watson, Lisa from Lox and Savvy also runs The Paper Collective Convention as well as runs events like last weekends The Zine Society and is paired with Sam Watson, a second year Billy Blue student who is an up and coming illustrator.

Eskimo / Real, Eskimo are one of Sydney’s top design studios, with an emphasis on fashion, and Real Graphic Design Studio are three lovely ladies based in Byron; Kat Charles / Myles McAlister, Kat is a sick surf photographer and Myles is a super talented third year design student; Toby + Pete / The Design Kids, Toby + Pete are famous for their insane three dimensional typography, and installations, and TDK (thats us!); Naughtyfish / Gui Andrade, another top Sydney studio with some beautiful work, and an awesome visual artist and graduate from Shillington College; Maud / Nick Rudenno, a small studio with some great work and Nick is ex-Design is Kinky and current Nowhere Famous designer; Lulu + Dittmar / Matt Roland, Lulu and Dittmar used to collaborate on The Company We Keep, now they have many other exciting things on the boil, Matt Roland is a third year UTS student who also works at Eskimo, and is a top illustrator; Gaffa / Natasha Bartoshefski, Zoe ‘Queen of Gaffa Gallery’ makes funny jewellery made of little men and generally is pretty damn awesome, and Natasha is a super talented designer on the environments team at Frost.

Saatchi / Ben Welch, Lizi Hamer from Saatchi is a huge traveller and takes some awesome photos and its paired with Ben, skater/photographer and a current student; Toben / Louise Odelberg + Nicole Liedburg, a studio with some great editorial work amongst other treasures, and our favourite two Swedes Louise and Nicole (don’t try to separate them!), who just graduated from Billy Blue and are pretty super! Then we have Monogram / Koen Arbouw, a Surry Hills based studio with some great clients and even greater work, and Koen, a super duper third year Dutch design student; Shillington College / Jennifer Long, a Sydney based design college and Jen who is the name behind Inky Blanc and does some very beautiful animal illustrations, Debaser / Michael Jenkins, they are well known for doing a lot of artwork for major Aussie bands and Michael who does some very lovely colleges and is currently in third year at Billy Blue and last but not least, One8one7 / Joel Ebsworth, a super talented studio down the coast near Wollongong, and second year design student with some mean pen skills! 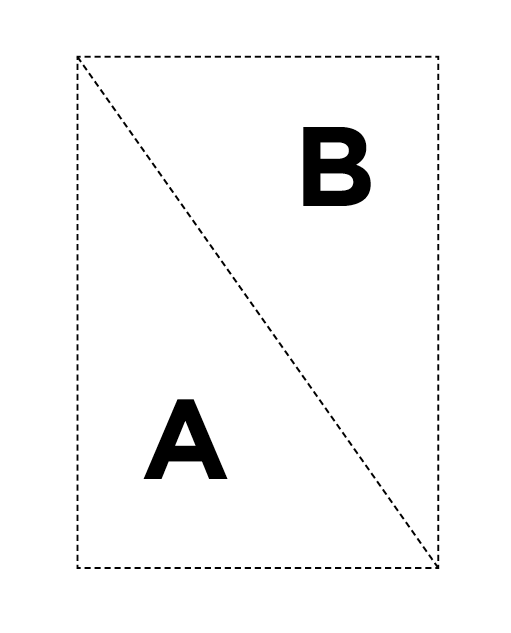 Do you have any future plans for the exhibition?
We’re really happy with the response we’re received from the show and the interest from the major design studios in Sydney, as well as support from Australian INfront and Desktop Magazine. I’d really like to take to show to Melbourne and Brisbane next year. The Australian design scene is quiet small but very talented so its really nice to work along side peers and make some new friends along the way, as well as giving some up and coming students and graduates some much needed exposure.

Lastly, what details do people need to know about the upcoming Sydney exhibition?
It is being held from 7pm – 10pm, with the auction finishing up at 9pm. It’s Wednesday 14th December, at The Wall, upstairs at The World Bar in Kings Cross. There will be a silent auction where you can buy the works of your favourite creatives from as little as $50 and up, and the money will go to a charity of the designer’s choice. Swing past, buy some works, have fun and be merry!

You can find all the details here on our facebook invite. See you there! 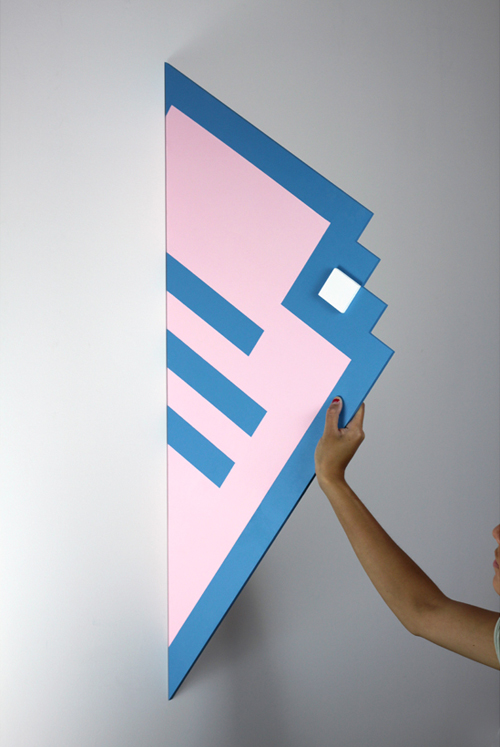